My First Project and Most Recent Publication

Academia is a marathon. While it can often feel like a sprint, with deadlines fast approaching and crowds running past you, ultimately everything takes more time than you first think. Case in point: my first ever graduate research project way back in 2010, which ultimately became a chapter in my dissertation which I finished in 2012, was finally accepted for publication last year in the Journal of Experimental Political Science and is online as of September 14, 2017. I never thought it would take eight years to see this research come to light, nor did a much more naive and much younger version of me imagine that it would go through a series of (sometimes painful) rejections. Yet the experience of carrying this project from a nascent idea in the back of the mind of an early graduate student through to publication in a peer-reviewed journal fundamentally transformed how I think about science and specifically open science. Here’s the story of this paper.

I started graduate school in 2008, fresh out of undergraduate at the University of Minnesota with the goal of studying something vaguely at the intersection of political theory, history, and political psychology. Actually, to give you a taste of my mindset, here’s an excerpt from my graduate admissions essay that somehow got me into Northwestern:

I have become interested in exploring the use of selective histories, political myths, and generational analogies as persuasive tools for priming, framing and agenda-setting in elite rhetoric and as frames in which voters construct attitudes toward current events. I hope to research how the relationship between elite-level and media interpretations of historical events both retell narratives of shared experience and create tension between different ideologies and frames.

To be clear: I never did anything on “selective histories, political myths, or generational analogies”. I did, however, remain interested in elite political communication and its psychological effects. But two years of coursework got me much more interested in the question of citizen competence and the measurement of political knowledge in particular. I spent much of 2009 and 2010 trying to think up a way to cleverly demolish the existing literature on political knowledge. To convey how long I thought about that, a visual of my version control system: 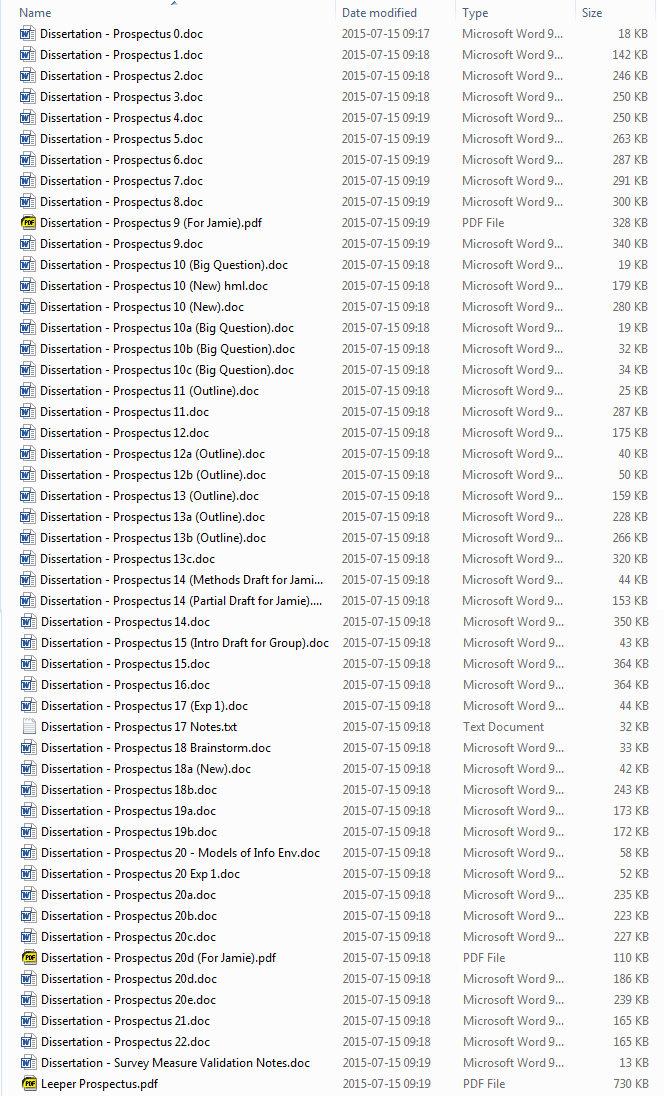 Version control was not my strong suit. The first of those drafts proposed that I spend my dissertation trying to understand the following:

As it would turn out, only the second of those three questions ever became part of my dissertation - indeed, the question of how citizens acquire information is ultimately the only thing I actually studied in my dissertation research.

The first idea for the dissertation was simple: how does attitude strength change the way that people engage with political information? This seemed important because the literature on political communication at the time (and still to this day) adopts one of two paradigms: either researchers randomly expose participants to messages and see what happens or they let people choose information and study the choices per se. My idea was simple: what if we compared those two approaches and looked at the downstream effects, and given that attitude strength might change both what kind of information people acquire and how they respond to it, let’s throw that into the mix as well. What came out was a relatively simple survey experiment, which I was able to piggyback onto another survey that my advisor, Jamie Druckman, was already doing in the spring of 2011. It took two years to come up with this first dissertation project idea and about six months to design it, field it, and get the data processed.

Eventually, it made its way into my dissertation and helped me to conceptualize and design the subsequent two empirical chapters. Oddly enough, the other two papers came out first: one in the American Political Science Review in 2012 and the other in Public Opinion Quarterly two years later. “Chapter 1” as it lovingly remained known in my Dropbox folder lingered on. It failed several places: American Journal of Political Science, The Journal of Politics, and Political Behavior. I abandoned it for a while.

Then, the Journal of Experimental Political Science came around with a first issue published in 2014. I submitted it in late 2015, received an R&R, resubmitted in mid-2016, received a conditional acceptance, some stuff happened at the journal, and I received confirmation it would be published in August of 2017. It is now online. It’s been a long history.

These are some lessons learned from a research marathon that started when I was a second-year graduate student and ended when I was a tenured professor. Research takes time, it’s better when done openly and carefully, and ultimately it’s worth the wait.

Except where noted, this website is licensed under a Creative Commons Attribution 4.0 International License. Views expressed are solely my own, not those of any current, past, or future employer.