MTurkGate Is A Good Reminder To Practice Our Fractions

On the morning of June 23, 2015, I received an email from Amazon Web Services describing the final details of previously announced fee changes in celebration of Amazon Mechanical Turk’s 10th anniversary. Here’s the email:

We’re writing to follow-up on our post “Bringing Future Innovation to Mechanical Turk” published May 21st to the Mechanical Turk blog http://mechanicalturk.typepad.com/. In the post, we indicated that we were analyzing changes to our commission structure, including changing our base commission to somewhere between 20% and 35%. We have settled on changing our base commission to 20% and modifying other elements of our pricing. These changes take effect at midnight on July 21st, 2015. We are introducing the following updates:

These changes will help allow Amazon to continue growing the Amazon Mechanical Turk marketplace and innovating on behalf of our customers. You can learn more about these changes here: http://requester.mturk.com/pricing.

If you have any questions, you can contact us at: https://requester.mturk.com/contactus.

The SPSP Blog has a good summary of the underlying issues and the emergence of the #mturkgate hashtag. The email matters because MTurk has become a major platform for two things: (1) crowdsourcing human computation tasks (e.g., image moderation, transcription, etc.), and (2) academic survey-experimental research. The fee changes affect the latter group particularly hard because a “HIT” for an academic study will typically involve several hundred or thousand assignments (see the second bullet point in the email). This means that in reality, the fee increase is actually from 10% to 40% rather than 10% to 20%, as for HITs with fewer than 10 assignments.

As something of an aside, less discussed is the fact that the fee changes also affect projects with many HITs but few assignments per HIT. So called “penny HITs” are typically incredibly simple tasks that can be performed in a matter of seconds and simply require, for example, an up/down vote on whether an image matches a certain description. (Workers often use these HITs to boost their performance statistics, which affect their qualification for other HITs.) These HITs will typically pay just $0.01 or maybe $0.05, but offer workers thousands of individual tasks in a “batch”. The first bullet point in the email mentions that the minimum per transaction fee will increase to $0.01 (up from $0.005). Amazon charges this minimum because penny HITs would, at the previous rate, only pay Amazon $0.001 per assignment. The change (from $0.005 to $0.01) doesn’t seem like a lot, but for penny HITs that fee increase is enormous. Imagine, for example, that you are a requester posting 100,000 images to be categorized and you pay $0.01 per task. Under the old pricing, you would pay $1,000 to workers (100,000 * 0.01 = 1000) plus $0.005/assignment to Amazon (100,000 * 0.005 = 500), for a grand total project cost of $1500. Under the new pricing scheme, the fees to Amazon have doubled, making the total cost of this penny HIT project drmatically more than it would be under the current scheme. Rather than paying a 50% fee on these tasks, requesters will now pay a 100% fee.

To express the fee change on more typical academic-style HITs, I tweeted a pretty simple graph displaying the total cost of a project at varying reward amounts from $0.01 to $1.00 per HIT with a y-axis representing the total cost of the project. As one can see, the fee increase means a pretty simple shift in the slope of the cost of a project, except at the very low end where penny HITs get caught by the new minimum commission: 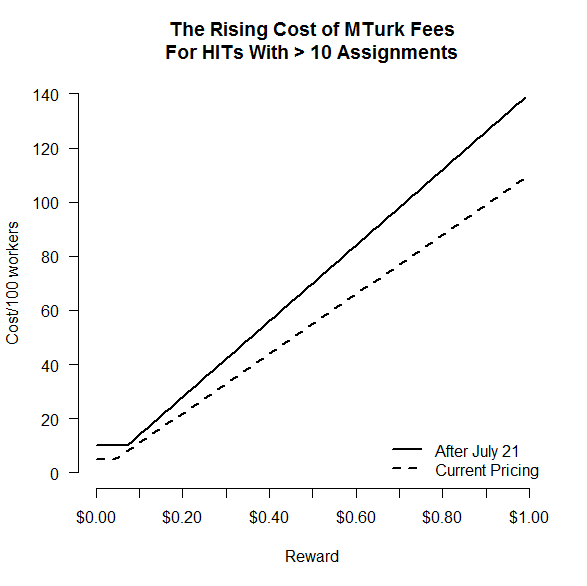 I thought this was pretty straightforward and was aimed at requesters: how much more is your project going to cost compared to how much it cost before, if you held per-assignment reward amount the same. (Carey Morewedge also produced one emphasizing how the proportion of the total cost of a project going to Amazon would now be higher.)

The part of the Twitter discussion on the #mturkgate hashtag that I found fascinating was how people were conceptualizing the cost increase (i.e., how large they understood the cost increase to be when they expressed it in their minds in different ways). Here are some different ways we can think about the cost increase, all of which result from the same basic fact that the commission will increase from 10% to 40% for the kinds of HITs academic researchers often use:

The fact that I can express a relatively simple change (fees moving from 10% to 40%) in so many ways is a good reminder to take a minute and think about how best to express that change. Obviously, “fees quadruple” sounds horrendous and “300% increase in fees” sounds bad, but maybe not quite as a bad. A “27.3% increase in total costs” sounds bad, but maybe not that bad given that Amazon has never previously raised their fees. When we express the change as the share of total costs going to workers decreasing from 91.0% to 71.4% or that workers can expect to receive 21.4% less highlights why #mturkgate emerged: requesters talking about fleeing MTurk because they will pay 27.3% more is interesting given that workers might expect to receive 21.4% less for the same work.

It’s incredibly easy to frame numbers both to serve one’s objectives and to mislead about the size of the underlying values. Graphing can help, but it’s also important to remember that the fee increase is a slope change, not a change in functional form, so regardless of the cost of your MTurk project the cost will only be 27.3% higher. There is no exponential increase in cost. If one were to extend the axes of my graph to infinity, the picture would remain the same with the new line being 27.3% higher than the line representing current costs. (Though a graph with an expanded x-axis would cover up the enormous increase in total cost for penny HIT projects.) As a requester, I was concerned about total cost, so I graphed that in what I thought was the most useful way. If one’s concerns are different, they can follow any of the different ways of framing the change listed above and draw a different graph that emphasizing the change most relevant to them.

But, the key point I want to make is that there was a lot of confusion, or perhaps even miscommunication, about the implications of the new fees because individuals expressed that change in different terms (percentages, changes in percentages, ratios, fractions, etc.). I’ll run away from a 300% increase but I can probably cope with a 27.3% increase (unfortunately for many, achieved through a mix of smaller samples and lower worker rewards). It’s easy to get caught up in the numerical framing and lose the larger picture. Fractions, percentages, and changes are the bread and butter of scientific communication, so I thought this conversation was an excellent case study in the challenges of communicating numbers. Hopefully it serves as a reminder to be clear (both to ourselves and to others) about what we mean when we talk about a numeric change or effect.

Except where noted, this website is licensed under a Creative Commons Attribution 4.0 International License. Views expressed are solely my own, not those of any current, past, or future employer.